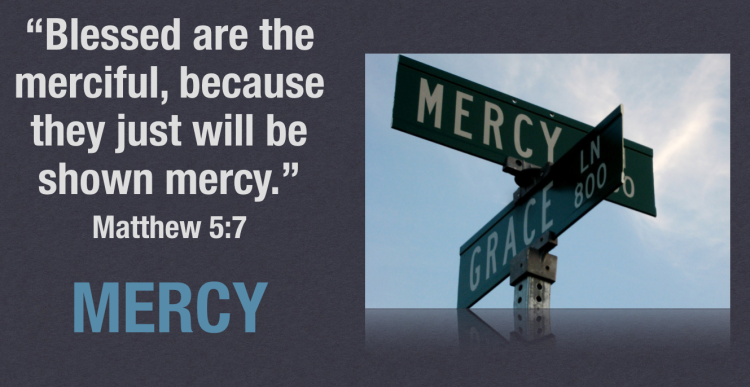 ♦ Sorry, no audio for this message is available

We are making a journey through the beatitudes, found in Matthew chapter five. All begin with the word “blessed” – another word for blessed is happy. Humility was the first step to happiness. Repentance was the second. Teachability was the third, and starving for Righteousness was the fourth step.  Today we look at  Becoming Merciful  – The fifth step to happiness:

“Blessed are the merciful, because the just will be shown mercy.” Matthew 5:7 (HCSB)

We who love and follow Jesus are expected to show mercy and forgiveness. Jesus is saying this is another ”be“ attitude and that you get what you give.  It’s the law of direct return. If you’re friendly with people – they will be friendly to you. If you show mercy to others, they  will  show mercy to you. We may define mercy as love in ACTION. Let’s look at four hallmarks of mercy:

1. I’m merciful if I’m patient with people who are DIFFERENT from me.

We all have some experience of people who are, simply put, **peculiar**. People who do not see things the way we do, perhaps acting is ways we consider outrageous. Sometimes we know someone we describe as a sandwich short of a picnic, or say they really are a good egg, just a little cracked. How do you handle these people? The Bible says:

“Warn those who are unruly, comfort the fainthearted, uphold the weak, be patient with all.” 1 Thessalonians 5:14 (NKJV)

Patience! The test of good manners is to be patient with bad ones. Julius Caesar said: ‘It is easier to find men who will volunteer to die, than to find those who are willing to endure pain with patience’ How might we be patient with those who are different from us? One of the best ways is to learn their background – understand where a person has come from – and you will be more patient with a person.  Walk a mile in their shoes, we say. Seek to understand their hurts and struggles. Don’t be quick to criticise or to judge. Merciful people are accepting people. I read of a married lady who once said she prayed for …

2. I’m merciful if I forgive those who have FALLEN

When people make mistakes do you hold it over their heads or do you forgive? If someone has hurt you – do you remember it every time you see them, forever holding a grudge? I have never been able to fully get the thing we often hear about ‘forgive and forget’. It’s been made a great virtue, but it is not really a Christian concept. Forgiveness is Christ Like, of course. I know God forgives but I’m not sure that God forgets. God doesn’t have ’Holy Amnesia’, but God does have a forgiving heart. What He does when He forgives me is to treat me as if I had never done the wrong, as if I had never sinned. He acts as if I had never done anything wrong. That is mercy. That is forgiveness.  God knows exactly what I have done – every detail – and yet He treats me as if I had not done it. That is incredible, but true.

Charles Stanley tells about a memorable seminary professor with had a practical way of illustrating to students the concept of grace. At the end of his evangelism course he set the exam with the caution to read it all the way through before beginning to answer it. This caution was written on the exam as well. As students read the test, it became unquestionably clear they had not studied enough. The further they read, the worse it became. About halfway through, audible groans could be heard throughout the lecture hall. On the last page, however, was a note that read, “You have a choice. You can either complete the exam as given or sign your name at the bottom and in so doing receive an A for this assignment.” Students would sit there stunned. “Was he serious? Just sign it and get an A?” Slowly, the point dawned on them, and one by one they handed in our tests and silently filed out of the room. That professor shared some reactions received through the years. Some students took the exam without reading it all the way through, and they would sweat it out for the entire two hours of class time before reaching the last page. Others read the first two pages, became angry, handing the test in blank, and storming out of the room without signing it. They never realized what was available, and as a result, they lost out totally. One fellow read the entire test, including the note at the end, but decided to take the exam anyway. He did not want any gifts; he wanted to earn his grade. And he did. He got a C+, but he could easily have had an A.

This story illustrates many people’s reaction to God’s solution for sin. Some look at God’s standard — moral and ethical perfection — and throw their hands up in surrender. Why even try? They tell themselves ‘I could never live up to all that stuff’. Others are like the student who reads the test through, become aware of the professor’s offer but take the test anyway. Unwilling to simply receive God’s gift of forgiveness, they try to rack up enough points with God to earn it. But God’s grace is like the professor’s offer. It seems unbelievable, but accept it, then, like the stunned students who accepted the professor’s offer, we, too, discover God’s grace truly is free. All we have to do is accept it. The Message translation says in Colossians:

“Be quick to forgive an offence. Forgive as quickly and completely as the Master forgave you.” Colossians 3:13 (MSG)

3. I’m merciful if I help those who are HURTING

The Bible tells us over and over that we must to help those who around us. Proverbs chapter three says:

“Never walk away from someone who deserves help; your hand is God’s hand for that person.” Proverbs 3:27 (MSG)

Remember: mercy is love in ACTION. We all know people around us who are hurting. You hurt – I hurt — we all hurt sometimes. Mercy is the action we take in helping people who are hurting. Do you remember the story of the Good Samaritan?  A man was beaten and robbed — thrown to the side of the road. Two people walked by and said, “I can’t get involved. I’m sorry about what has happened — but I just can’t get involved. I have other things to take care of. I’m too busy to help anyone right now.”  A third person comes along — also busy — yet he took action. He picked up the man — took him to the nearest Premier Inn – left his Credit Card as security and said, “I’ll return later to see how things are going. When I come back – I’ll pay for it all!” This man showed love. This man showed mercy. As Christians we are going to be judged for the way we have treated other people. Matthew chapter twenty-five says:

“I was hungry and you gave Me food; I was thirsty and you gave Me drink; I was a stranger and you took Me in; I was naked and you clothed Me; I was sick and you visited Me; I was in prison and you came to Me.’ Then the righteous will answer Him, saying, ’Lord, when did we see You hungry and feed You, or thirsty and give You drink? When did we see You a stranger and take You in, or naked and clothe You? Or when did we see You sick, or in prison, and come to You?’ And the King will answer and say to them, ’Assuredly, I say to you, inasmuch as you did it to one of the least of these My brethren, you did it to Me.’ Matthew 25:35-40 (NKJV)

4. I’m merciful if I do good to my ENEMIES

Wait. One minute, you’ve got me thinking about being kind to strangers, but how on earth can anyone expect me to be nice to my enemies? Look at what it says in Luke chapter six:

“Love your enemies, do what is good, and lend, expecting nothing in return. Then your reward will be great, and you will be sons of the Most High. For He is gracious to the ungrateful and evil. Be merciful, just as your Father also is merciful.” Luke 6:35-36 (HCSB)

If you want to be like God – show mercy – even to those you don’t like. Do good to those who do evil to you.  Which is exactly the opposite of a secular world view, which says when people hurt you – hurt them back. Get even! Gossip about them, talk behind their back about them, destroy them, do anything you can to get even. But God says, “No! Be merciful just as I am merciful. Forgive just as I forgive.” As soon as we end the service, we get the opportunities! Imagine someone who constantly criticises you is there – he is really obnoxious – and the Bible says show him mercy – even to people who are extremely unpleasant.  How would it be if with every criticism you genuinely complimented him? It would probably get his attention, and get him off balance.  That’s what being merciful is about. You’re on the offence not the defence, looking for ways to love your enemies, looking for ways to be merciful instead of hateful. Why? Because it’s what God wants you to do. The best way to eliminate an enemy is turn them into a friend. Show them much kindness. They don’t know how to handle it. They don’t know what to do with it. All of a sudden your in control of the situation. You’re on the offensive not the defensive because mercy is love in action.

That’s four hallmarks of mercy – in closing let’s look at two reasons to show mercy. The first is simply because God has been merciful to ME. Someone has said:

God has shown mercy to us – we are compelled to show mercy to others. Remember Luke chapter six:

“Love your enemies, do good, and lend, hoping for nothing in return; and your reward will be great, and you will be sons of the Most High. For He is kind to the unthankful and evil. Therefore be merciful, just as your Father also is merciful.” Luke 6:35-36 (NKJV)

“Blessed are the merciful, because the just will be shown mercy.” Matthew 5:7 (HCSB)

There is a promise there. The merciful  will be shown mercy. It is an example of “you reap what you sow.” What you give is what you are going to get:

You ought to be a merciful person — because you reap what you sow. Like a boomerang comes back, what you give — you get. How do I become a merciful person? The starting point is to first experience the mercy of God. You cannot offer mercy to anyone until you have first received mercy. You can’t be a forgiving person unless you have been forgiven. The place you begin is you must receive the mercy of God. And Jesus offers us mercy. Jesus offers us forgiveness. Jesus offers us peace. Come to Him – ask Him into you life and ask Him to take control of your life. Ask Him to forgive your sins – ask Him to be your Saviour – do that and He  will give you forgiveness and He will give you mercy.

Part of a series drawn from the Beatitudes. See the rest: